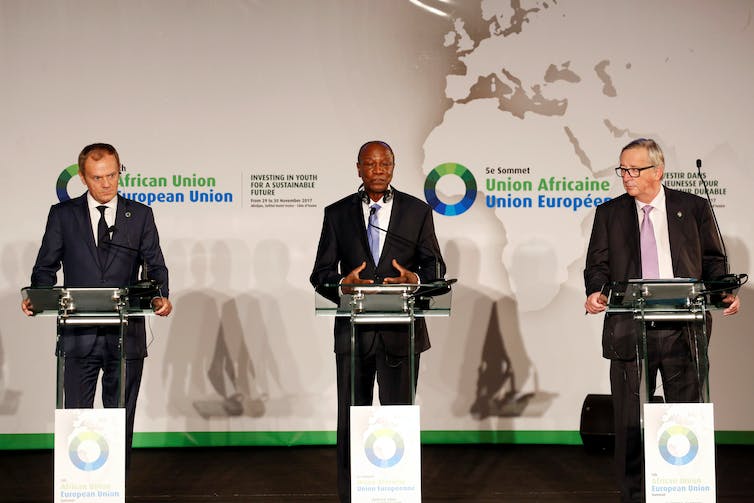 African and European heads of government gathered last week in Abidjan, Côte d’Ivoire, for their 5th summit since 2000. For the first time, the African Union (AU) rather than “Africa”, officially appears as the European Union’s partner. While plenty has been discussed about youth, migration, security and governance less is being said about the shift from an EU-Africa to an AU-EU summit.

Is this just a case of semantics? After all, the AU has been the key organiser of these triennial summits since they started in 2000. Or are there larger implications? We think there are.

The AU-EU summit coincided with the January 2017 report on the reform of the African Union prepared by Rwandan President Paul Kagame. The report recommends rationalising “Africa’s” many international partnerships by having the continental body take the lead. This means that the previous, current and future AU chairpersons, plus the AU Commission chairperson and the chairperson of the Regional Economic Communities, would represent the AU, rather than all its member states.

Despite some misgivings at the July 2017 AU Summit in Addis Ababa, Kagame’s proposed reforms were well received. The AU and its member states have committed to a timetable of reform implementation, heralding a potential new era for the AU.

The transformation of the EU-Africa summit series into the EU-AU summit in Abidjan is more than just a change of name. It reflects the increasing recognition of the AU as an international actor that is becoming difficult to circumvent when engaging Africa. But there’s still a risk that the recognition remains confined to ceremonial purposes, as long as key challenges such as funding and mandate are not resolved.

The first summit in Cairo in 2000 was intended as a meeting of the EU and the AU’s forbearer, the Organization of African Unity (OAU). But, the EU insisted on the inclusion of Morocco – the only African country not a member of the OAU and the exclusion of the self-proclaimed Sahrawi Arab Democratic Republic (SADR), a full member of the OAU.

Only after last minute shuttle diplomacy was the cancellation of the summit averted. The compromise solution was to call the event the “Africa-Europe Summit Under the Aegis of the OAU and the EU”.

The idea of “Africa” as the EU’s interlocutor was set.

This way of seeing Africa had repercussions for the relationship. Although the EU had targeted the AU as its principle partner by 2007, the AU’s organisational growing pains and less clear jurisdiction in external relations meant that it was exposed to the whims of its member states.

This was the case before the 2nd summit in Lisbon in 2007, when after months of AU-driven negotiation of the Joint Africa-EU Strategy, several AU member states voiced strong misgivings about it. Their objections on issues such as the restitution of stolen cultural artefacts, while crucial, were outside of the EU’s jurisdiction and threatened to scuttle the AU’s own good work.

The 2010 summit in Tripoli was overshadowed by the outsized personality of Colonel Muammar Gaddafi, who stole headlines insisting that the EU pay him to limit migration to Europe. Lost was the fact that the AU was endeavouring to upturn decades of EU driven agenda setting in the EU-ACP (Africa, Caribbean, Pacific Group of States) relationship.

In theory the AU’s new status in EU-Africa summits has the potential to substantially contribute to the AU’s cohesion, recognition and identity. But whether this upgrade will actually materialise or whether the summit only offers a ceremonial appearance of the AU’s standing will depend on four crucial factors.

Firstly, the AU still needs to be based on a sustainable financial mechanism. So far, it depends heavily on development aid for its activities.

Secondly, member states need to provide the AU with an authoritative mandate to negotiate on their behalf. While it is becoming a stronger institution, it still heavily depends on compromises between heads of states.

Thirdly, the AU has to compete for the EU’s attention with other existing partnerships with Africa. Plans are already underway for the it to play a more prominent role in the ACP. This would underline the central role of the AU for all interregional arrangements.

Fourthly, other international partners such as China will need to recognise AU’s central role in their summits with Africa. So far, China is focusing on bilateral relations and there are few signs of the direct relationship China-AU receiving a substantial upgrade.

Hippie with a Porshe

"All things in this vast universe exist in you, with you and for you" Kahlil Gibran

The Philosophy Blog of Steven Colborne